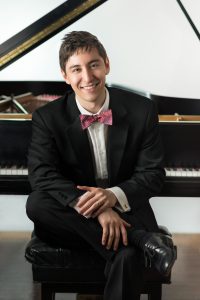 Sean Kennard has won top prizes in numerous international competitions including the Queen Elisabeth, and has released solo and chamber music albums on both Naxos and Delos. He has appeared as soloist with orchestras around the world such as the Prague Radio Symphony, Japan’s NHK Chamber Orchestra, National Orchestra of Belgium, Chamber Orchestra of Frankfurt, Morocco Philharmonic, Chile Symphony, and many more.

The Washington Post wrote of his “powerful and involved music making,” describing him as a “strong, luminous pianist.” According to American Record Guide, “he boasts a huge, romantic sound and a bold melodic vision,” and Fanfare wrote of his “penetrating sense of structure…full of life and sparkle.” Pianist Richard Goode called him “an extraordinary pianist, one of the most gifted I have ever heard…a most natural and unaffected performer, who conveys a calm authority even while whipping up a storm.”

He has studied at the Curtis Institute of Music, Juilliard School, and Yale University, and was appointed head of piano at Stetson University in 2017.